News
Home › News › The 10 000 € Winner of Pasiplėšom Championship: I Still Can't Believe It 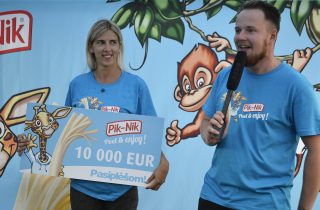 The 10 000 € Winner of Pasiplėšom Championship: I Still Can't Believe It

Among various concerts, exhibitions and fairs, this year the visitors of the Capital Days had a unique opportunity to participate at the finals of the Baltic Pasiplėšom Championship, organised by Žemaitijos Pienas Company, and win the prize of 10 000 €. The idea of the event – to tear up a Pik-Nik Cheese string and improve the previous record of 46 seconds – attracted not only Vilnius citizens and guests, but also the neighbouring Latvians.

The main task of Pasiplėšom Championship was to divide a Pik-Nik Cheese string into at least 30 pieces. At first the participants of the event didn't think of the Championship, promising the main prize of 10 000 €, as very challenging, but the rules stated something else: participants had to put each piece of the cheese string on a separate square of the game board until the game board is full and the cheese string had to be divided along its entire length.

As many as 228 Pik-Nik cheese lovers, including 30 Latvians, decided to try their hand in participating at Pasiplėšom Championship, which took place all over the Baltic States, but the cheese tearing record-breaker was a Lithuanian student Greta Mulskytė. She not only managed to achieve the 46 s record, but also to break it by tearing the cheese string in only 41.

The winner admitted that this wasn't her first time. "I've already participated in 2011. Accidentally, I've heard of another championship this year and decided to try again." said G. Mulskytė.

The winner of Pasiplėšom Championship admitted training hard for the entire month before the event, doing that several times a week. When asked, if she hoped to win, the student said that she had thought about it: "I had some hope, because I was doing pretty well and improved the record at home."

G. Mulskytė admitted that she still finds it difficult to comprehend winning 10 000 €, but agreed to reveal the emotional rollercoaster that she was on during the championship. "The worst thing while tearing the cheese strings is the tension – you're afraid to mess it up, tearing off too much than you should." she said.

The lucky winner assured that she didn't have time to think about spending the prize of 10 000 €, claiming that she was still in a little shock, which came after the end of the championship. "It was hard to believe at first. Of course, I'm really happy, but haven't thought of spending it so far." said G. Mulskytė.